We’re bringing you our top picks for the fall and early 2019 for you and your library patrons, based on our trips to recent conferences. This is part one of a two-part episode, featuring titles from WW Norton, Simon & Schuster, New York Review Books, HarperCollins, Harlequin, Workman, Macmillan, and Bloomsbury!

Workman
Burning Down the Haus: Punk Rock, Revolution, and the Fall of the Berlin Wall by Tim Mohr (Algonquin, September 2018)
Handmade Houseplants: Remarkably Realistic Plants You Can Make with Paper by Corrie Beth Hogg, photos by Christine Han (Timber Press, September 2018)
The Museum of Modern Love by Heather Rose (Algonquin, November 2018)
The Collector’s Apprentice by B. A. Shapiro (October 2018)
1,000 Books To Read Before You Die by James Mustich (October 2018) 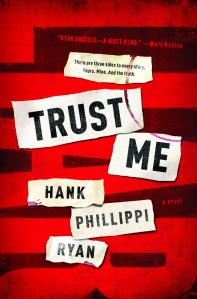 The Ravenmaster: My Life with the Ravens at the Tower of London by Christopher Skaife (Farrar, Straus and Giroux, October 2018)
Twitter: @ravenmaster1
The Other Woman by Sandie Jones (Minotaur Books, August 2018)

Bloomsbury
One Person, No Vote: How Voter Suppression Is Destroying Our Democracy by Carol Anderson (September 2018)

The Priory of the Orange Tree by Samantha Shannon (February 2019)
The Girl King by Mimi Yu (Bloombsury YA, January 2019)
A Shot in the Dark (A Constable Twitten Mystery) by Lynne Truss (November 2018)

Sometimes when you’re having trouble figuring out how to narrow down your choices, you do a bracket. Well, you do that if you’re Anna. Alene likes to ask everyone she knows what they think. In this episode, we do both.

The Americans
Atlanta
Black-ish [Hindsight is 20/20 note: This should probably have been in comedy, where it also would have won]
ER
Friday Night Lights
Homeland
House of Cards
How to Get Away with Murder
Jane the Virgin
The L-Word S2-S6
Make It Or Break It
Masters of Sex
One Day at a Time
Orange is the New Black
Parenthood
Scandal
Sports Night
The West Wing
The Wire

In this episode, Anna and #NumberOneFan @surlyspice talk about pop culture they’ve encountered from countries that don’t use English as their primary language. Please send us your favorites as well! Tweet at us! Comment on Facebook! Send us one of those old-fashioned email things (bellwetherfriendspodcast [at] gmail)! In the meantime, check out our new playlist on Spotify.

Edith Piaf’s La Vie en Rose
Eurovision
Shakira on the Latin Grammys
“Music Has No Borders” Buzzfeed list
One Hundred Years of Solitude vs. Love in the Time of Cholera
The Three Musketeers by Alexandre Dumas

Lottie and Lisa by Erich Kästner
Candide by Voltaire

During this episode, Anna and Carolyn talk about the latest Pixar release, Inside Out, as well as answering listener questions. Everything you ever wanted to know about us, all wrapped up in one tasty episode.

Musical Obsessions
Carolyn: Taylor Swift, “Out of the Woods,” “All You Had To Do Was Stay”
TWO BOSSY DAMES on 1989
Anna: Kelly Clarkson, “Heartbeat Song”
Spotify playlist

This week, we invited each other to watch TV episodes from shows we hadn’t seen before, with shocking results! It’s TV Advisory!

Musical Obsessions
Anna: “Steal My Girl” by One Direction
Carolyn: “Ghost” by Halsey

Introducing our best of 2014 lists, which are both arbitrary and silly (as you might have suspected)! New Year’s resolutions? We should go to more concerts. We should keep better track of things.

Carolyn’s List
Guardians of the Galaxy
Sisters by Raina Telgemeier
“Chocolate” by 1975
How to Get Away with Murder
Station Eleven by Emily St. John Mandel
Gabi, A Girl in Pieces by Isabel Quintero
The Storied Life of A.J. Fikry by Gabrielle Zevin
The Lego Movie
True Detective
Walk the Moon‘s album Talking is Hard